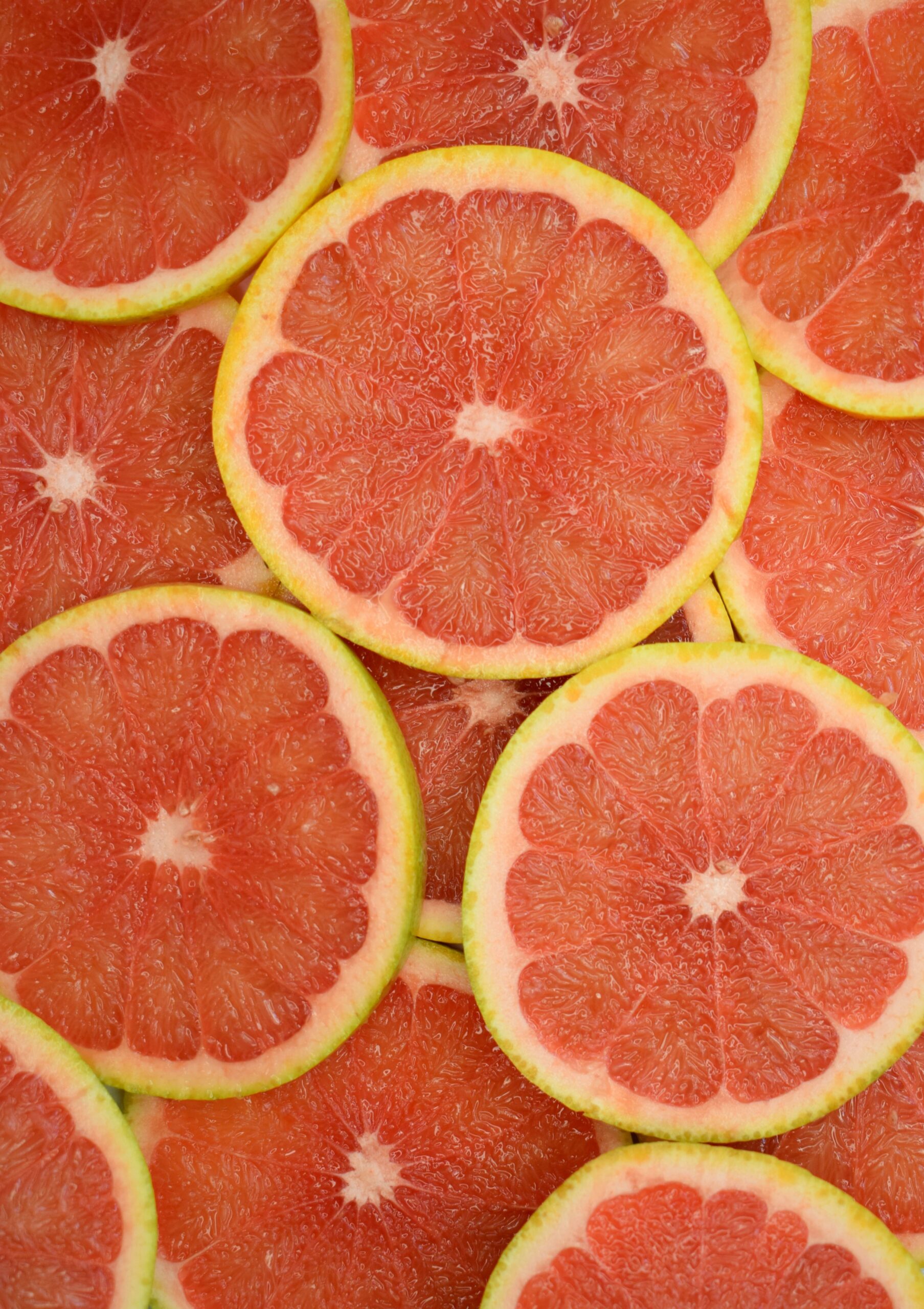 I find the individual stories about each food fascinating. Each individual food ingredient has its unique story about which comes from its history, science, cultural influences, and supply chain etc. There are so many books and articles written about different foods including salt, cod, tomato, apples, bananas, milk, and bread. Many food scientists spend their whole careers studying the behavior of one ingredient such as salt, sugar, gelatin etc. Or in my case, one reaction; the Maillard reaction causes the colors, flavors and aromas we love during and after toasting, grilling, roasting, and baking our food.

Late last year (2021) a friend from Fresno, CA, sent me a box of grapefruit from a tree in her back garden.

My mouth is watering at the memory.

I am quite envious of Californians who can grow citrus in their gardens.

Grapefruit are less popular than oranges because they are very sour and tart. They are considered a breakfast fruit and usually we eat them by cutting them in half and sprinkling with brown sugar before grilling or broiling the top to melt the sugar. There is even a grapefruit spoon to help remove the flesh from the peel.

In this article, I explore grapefruit from a scientific perspective and from food systems perspective.

In this section, I share two interesting science facts make grapefruit a challenging food to eat:

When we take drugs or eat compounds that our body considers as toxic, there is a process for inactivating them. Most of the drugs we take are metabolized by cytochrome P450, a family of more than 50 enzymes found throughout the body, especially in the liver as it is the main organ involved in detoxification.

In Phase 2 Liver Detoxification, other enzymes further metabolize them into water soluble waste compounds which are excreted in our urine.

The drug detoxification process is very efficient and pharmaceutical researchers assume that 90% of drugs are inactivated by cytochrome P450 system. Thus, pharmacologists work out drug doses based on the fact that only 10% will be effective.

Grapefruit is now a well known inhibitor of the  cytochrome P450-mediated metabolism of drugs. Grapefruit contains lots of furanocoumarins, compounds that interfere with cytochrome P450, switching it off. This is a problem because if you take some drugs with grapefruit, the detoxification process is inhibited and 100% of the drug may enter our blood stream. For some drugs, this could be fatal as listed here and these drugs come with a warning to avoid grapefruit. Thus, grapefruit is forbidden from the diet of people taking these drugs.

All citrus fruit contain sugar and citric acid, as well as other organic acids, such as ascorbic acid, which we know better as Vitamin C.

The balance between sweetness and acidity gives us the tastes we expect when we bit into a slice of citrus fruit. Thus, lemon juice is more acidic than orange juice and oranges have more sugar than lemons.  pH is one way we measure acidity; the lower the pH the more acid – lemons have an approximate pH 2.30, oranges pH is around 4.35 and grapefruit are in the middle with a pH 3.38 (ref).  Yet grapefruit are more bitter than lemons because they also contain a bitter compound called naringin.

Our response to tastes like bitterness is genetic; some of us are more sensitive than others and some people do not find grapefruit bitter at all! These genetic differences may also influence whether you like IPA beer. Another genetic taste response is whether you find cilantro soapy.

You can test to see if you are sensitive to bitter flavors by trying one of the two main taste tests for bitterness sensitivity: Phenylthiocarbamide (PTC) and 6-n-propylthiouracil (PROP). Most people who find grapefruit bitter are PROP sensitive individuals.

Not to fret if you are a supertaster for bitter; as some of us who are sensitive to bitter flavors we seek out bitter flavors and we still love grapefruit.

As well as their science being fascinating, the history of grapefruits is also strange. Unlike most citrus fruit, which originate from Asia, grapefruits are originally from Barbados where citrus fruits were planted all over by Europeans without any consideration of their ability to easily crossbreed. The citrus trees were probably excited to have a climate in which they could grow with limited pests.

Three citrus fruits widely spread from Asia were the citron, the pomelo, and the mandarin. Grapefruit are thought to be a cross between the pomelo and a sweet orange, which itself is a hybrid of pomelo and mandarin.

Today, China is the biggest producer of grapefruit producing over 5,000,000 tons per year in 2017 and 2018. In contrast, the US and Mexico each produced about half a million tons of grapefruit.

I am excited that I now know more about the grapefruits my friend sent me from her tree in Fresno, CA.

You too can explore your food system more by researching one of the foods you ate today and let me know what you find out in the comments.

Here are some questions to get you started: